ZOOMCAR was founded and lead by an American Duo – David Back & Greg Moran. Greg had an idea about India as where he started his career in a bank had a branch in India as well. This is how ZoomCar was initially launched in 2013. They needed at least 50 cars in their name, registered, owned, and insured and also they needed to have five offices across the state in which they are getting a license. They have managed to grow on to become the largest self-drive rental company in India, with a market share of 60%.ZoomCar follows a model wherein the company owns almost 75% of the cars through loans from the banks. In against for the business and for all the operational support cost that ZoomCar will provide, they take a 30% commission of the revenue earned from the car, and they also provide a monthly minimum guarantee payment of 3% of the vehicle ex-showroom price. Full Detail in Blog.

Do you having ZoomCar facility in your city ??

By now, you must be thinking, what is so special in this ZOOM CAR.
I have shared the most detailed case study on ZoomCar with the ZoomCar business model.

WHATS IN IT FOR YOU?

Let’s start with the idea of ZOOM CAR developed in the minds of the founders.

The Story of zoom car starts with the founder.
ZOOMCAR was founded and lead by an American Duo – David Back & Greg Moran.

Greg had an idea about India as where he started his career in a bank had a branch in India as well.
He felt that India was a largely unexplored market and it must explore soon.

So Greg decided to visit India to explore it more than just on papers. At first, he had an idea of starting a company for the renewable energy space but
soon after his arrival, he realised that there was a strong business potential for the car rentals in India.
At the time, no player in India was offering a similar service of self-driven car renting.

ZoomCar would automatically receive the edge and because of the uniqueness in its fundamentals.

Greg believed his idea had the potential to click in India!

Once the idea and the business model was finalised, the next major challenge was to register this type of business in India.
They needed at least 50 cars in their name, registered, owned, and insured and also they needed to have five offices across the state in which they are getting a license.
To overcome this challenge, they jumped to the conclusion that they would tied-up with local operating owners who already had a license and ended up subleasing cars from them.

This is how ZoomCar was initially launched in 2013.

They used their license for almost ten to twelve months, after that, using the money they earned in the past ten months, they procured 50 cars of their own and also got the license.

Since then, there was no looking back.
They faced one problem after the another but the company always managed to survive the process and has managed to grow on to become a largest self-drive rental company in India, with a market share of 60%.

The company allows individuals to hire cars on rent.

Yes!! You can hire a car for a few hours to days to even months.

ZoomCar follows a model wherein the company owns almost 75% of the cars through loans from the banks.
While the remaining cars are on lease from large companies like Avis Budget Group.

Other than that, recently the brand has also started a new initiative called ZAP (ZoomCar Associate Program).

Here, individuals can invest in either a Maruti Ritz LDI or a Maruti Swift LDI (for now) and get into a 30-month Lease Agreement with ZoomCar to lease the car to them.

In against for the business and for all the operational support cost that ZoomCar will provide, they take a 30% commission of the revenue earned from the car, and they also provide a monthly minimum guarantee payment of 3% of the vehicle ex-showroom price to ensure a baseline level of repayment, as well. At the end of the lease tenor, ZoomCar will return the car to you.

Let me explain you in some very simple steps –

HOW TO BOOK A ZOOM CAR

You can book a zoom car by following 5 simple steps –

Step 1 – is to search for a car you want to book and then click on book car on their website or their mobile app.

Step 2 – Now, you need to upload your driving license through the website or the app and you need to pay a small security

Step 3 – Your request will be processed and 20 min before the pickup time you will receive the card details via SMS.

Step 4 – Then, at last, you need to fill the start checklist on the Zoom Car app. Then just grab the keys from the glove-box and drive.

Step 5 – You need to return the car to the same location from where you picked and fill the end checklist to finish your trip.

MANAGEMENT AND THE CORE TEAM

He is the Co-Founder and CEO(Chief Executive Officer) at ZOOMCAR.

Before co-founding Zoomcar, Greg studied at USC’s Marshall School of Business.
He was the Founder and President of the USC Energy Club, Southern California’s largest club.

Greg is also a graduate of the University of Pennsylvania, where he holds a degree in International Relations.

Apart from professional life, he is personally interested in playing the piano and hitting the golf links.

He is the Chief Technology Officer. He is responsible for the technology at ZOOMCAR.

He has a rich experience of working at an early stage with hyper-growth companies such as Speedera and Inmobi.

Vinayak is also a well-known speaker at various national and international technology conferences.

He is also the co-founder of Headstart Network which is a decade old not for profit network that mentors various early-stage start-ups.

Apart from professional life, he is personally interested in photography, travelling and reading books.

He is the Chief Operating Officer at ZOOMCAR.

Before joining ZOOMCAR, he worked with P&G for more than 8 years.  He also has 3 years of experience with DRDO in project management.

Apart from professional life, he is personally interested in playing golf.

He is the General Counsel & VP Corporate Affairs at ZOOMCAR.

Before joining ZOOMCAR, Manish has worked for some of the biggest organisations in India such as Snapdeal.com, ZTE Telecom, DLF Limited, Delhi Stock Exchange Association Limited and Yadu Corporation.

He is the Chief Marketing Officer at ZOOMCAR.
Varun is responsible for the marketing and demand side of the business at Zoomcar.

He is having more than 12 years of experience in the field of marketing and growth strategies. His expertise lies in growth marketing and scaling up internet businesses.

loves to read during his travel and leisure time also he likes to go on unplanned road trips.
He has travelled to 12 different countries so far.

He is the Senior Vice President & Commercial Head at ZOOMCAR.

Before ZoomCar, Hemanth was previously working in the Principal Investment Area (PIA) of Goldman Sachs in New York. He worked on equity, loan investments and mezzanine in companies across multiple industries.

ZoomCar partnerships have been a great strategy for them.

ZoomCar has created several partnerships to improve their services and to grow gradually.

Few of such partnership includes automobile manufacturers such as Ford & Mahindra.

Their partnership with Mahindra and ford have allowed them to become the first car rental company in India to offer an electric vehicle i.e. the Mahindra REVA E2O and the Ford EcoSport.

They have also tied up with Tata Motors to add 50 brand new Tata Nanos to their fleet of cars.

Other than that, ZoomCar has also penned down several other partnerships with locally established real estate developers, universities, hotels, and corporate IT parks to secure parking for its vehicles and offer pick-up points to its members, as well.

In November 2013, ZoomCar also initiated for a noble cause partnering with Uber and the Ashoka Foundation.
Together they launched a campaign in Bangalore and named it RideSmartBLR to discourage drink and drive for its economical, health and environmental benefits, and encourage car-rental.

What is Zoomcar subscription?

It is basically paying monthly EMI’s for the car for both the personal use and for other uses.

It’s provided self-driving, they will provide you with a car and you have to pay some amount of money. Depending on the car model and subscriptions they charge you.

Depending on the value of the car and the time period you rent for. Also, if you book a car as per kms then after the kms is over you have to pay per km of charge depending on the type of car.

What is Business Model of Zoomcar? 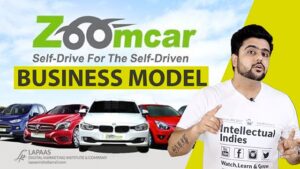