Today, Everyone Knowns Patanjali as It is the fastest growing FMCG company in India. It was started by Baba Ramdev And Aacharya Balkrishna in January 2006. It’s Manufacturing Unit and headquarters located in Haridwar. Its also has a manufacturing unit in Nepal. Patanjali declared its annual turnover of the year 2016-17 to be estimated 10,2186 crores. It was listed 13th in the list of India’s most trusted brand as of 2018 and ranked first in FMCG category. Patanjali’s consumers mostly came from its great Yoga and Patanjali ayurveda network. Patanjali Yog Samiti has 1Lakh branches and 5 lakh teachers.  The company doubled its sales targets each year and set its sights on total domination over the Indian consumers. It operates on Low Pricing and Cost dynamics. There are many Patanjali distribution Strategies like they used ADS(Alternative Patanjali Distribution System) to create new demand. Also, they are playing on Low Prices, Swadeshi Manufacturing, Part of the profits going to charity, Gaining Massive Popularity from Yog Guru Ramdev Baba, Natural & Ayurvedic Products and much more.

As Baba Ramdev is famous for Yoga and Ayurveda.

In this blog, You will get to know the entrepreneurial side of Ramkrishna Yadav.

How a Desi Company replaces Colgate?

Have you ever think about the Patanjali business model?

How Patanjali is producing so many types of products?

We have got all covered for you.

Started by Baba Ramdev And Aacharya Balkrishna in January 2006, Patanjali is an Indian consumer goods company Manufacturing Unit and headquarters located in Haridwar. Its also has a manufacturing unit in Nepal.

According to CLSA and HSBC, Patanjali is the fastest growing Indian FMCG. Patanjali declared its annual turnover of the year 2016-17 to be estimated 10,2186 crores. It was listed 13th in the list of India’s most trusted brand as of 2018 and ranked first in FMCG category.

#5 A Baba as Brand Ambassador.

#6 How Patanjali challenged The FMCG Protocol

#10 Challenges by Patanjali from Multinationals

#11 How Patanjali is planning its future

There are 10,000 Patanjali Chikitshalya and Arogya Kendras.

The people who come to their yoga camps are ready to market to the company. Added to that all kind of Swadeshi branding of Baba Ramdev.

Its integrated mega-facilities is Haridwar, their firm churned out as much as its customers demand.

After pramotic swadeshi to consumers Baba Ramdev building a business empire by targeted traders community on the swadeshi plank.

You saw in its ad in social and print media, Patanjali Ayurved is appealing to shopkeepers “to give prominence to Patanjali product on shelves” because it “will help in fulfilling the dream of Mahatma Gandhi to promote Swadeshi”.

“The country needs Swadeshi Products; now we are telling shopkeepers to help in this movement.

Baba Ramdev followed the same strategy with organised retailers such as the Future Group, Reliance Retail and Shoppers’ Stop-promoted HyperCITY.

While Reliance Retail has created ‘Patanjali Destinations’ at its out.

Speaking at a Conclave, Patanjali CEO, Acharya Balkrishna questioned why the food processing sector in India was not generating enough revenue.

He went on to city figure from Thailand, Which indicated that India’s all food processing is only 6 % to Thailand’s 30%.

Patanjali’s combination of low prices,’ natural and pure’ proposition and ‘swadeshi’ positioning are widely acknowledged to be the reasons behind success, what is not that well known is the critical role played by Patanjali’s path-breaking sales and Patanjali distribution strategy in driving this exceptional growth trajectory.

A perfect Strategy for sales and distribution of patanjali was a key factor behind Patanjali’s meteoric Growth. Patanjali’s low-cost distribution system was remarkably efficient in getting the acceptance of its products against far heftier rivals.

The company doubled its sales and distribution of patanjali targets each year and set its sights on total domination over the Indian consumers. It developed a piece of hunger for new distributors and new channels for trade. Patanjali products are made available at an exclusive discount as compared to their companies. The company’s raw material comes directly from farmers.

It has lower marketing spends and overhead cost compared to its peer and as such can produce at a much cheaper price.

A large proportion of the India population, especially the middle class, is extremely price-sensitive and looks for quality products at a reasonable price.

Patanjali has understood and developed a strategy to take advantages of the aforesaid mindset capturing market share from share established players.

A Baba as Brand Ambassador

The other big factor in Patanjali’s favour is the image of Baba Ramdev. He is a recognized face all over India and beyond.

Patanjali can create a brand perception of health and wellness among the Indian masses, primarily because of Ramdev’s association with the brand who is considered to be a veteran of yoga and a firm believer of Ayurveda.

In India market where personalities outshine products, it’s imperative to have a brand of your own.

How Patanjali challenged The FMCG Protocol

Now the days Indian market is witnessing a tussle between FMCG brand to be on top of the game, especially in becoming the “desi-est brand”, which Has been occupied by Yoga Guru turned industrialist Baba Ramdev’s Patanjali Ayurved Ltd.

Since the international players started venturing into the market of India, they had only focused on eliminating the traditional and age-old methods and introducing modern techniques.

Patanjali made the “deshi” segment alive when other FMCG brand was still selling the chemically loaded herbal products.

Slowly other companies too started to look into space they had avoided looking in all these years, which is why other FMCG products to have started venturing their products in “desi” space.

As you all know Patanjali Ayurved Limited is an FMCG company. It gains profit by selling their Varieties of like herbal products. But another important thing is the profit earned by them goes to charity.

It can be proved  by the following points:

1- He is an unpaid Brand Ambassador

The 12 years old FMCG sector Company Patanjali has emerged as a prominent FMCG player in the market with a large number of products and deep assortments. Its manufacturing unit is located in Haridwar and outside India i.e.

Nepal under the trademark of Nepal Gramodyog.It is primarily in the business of minerals and herbals.

Like other FMCG Company, it uses the mass of demographic and psychographic segmentation strategies to make its offerings appropriate/relevant to the particular set of customer groups.

It uses undifferentiated targeting strategy, as the main objective Patanjali is to offer healthy Products to all people.

If Patanjali can double its turnover, even HUL will come within its biting distance. There is a man who knows how it can be done Acharya Balkrishna, the CEO.

A confidant of Baba Ramdev, Balkrishna holds a 94% stake in Patanjali Ayurved, but he doesn’t take home a salary. Yet, he works for 15 hours a day, even on Sundays and other holidays during the year.

He claims he hasn’t taken a single day’s leave.”I work daily from 7 am to 10 pm. While a normal person would work for 8 hours a day, I work for 15 hours through the week. I am doing the job of five people,” he says.

They also brought down the prices of their products and providing promotions in the top end multifunction toothpaste segment. Colgate  India is spending aggressively on advertising. As per the Market report, Colgate India spent about 12% of its revenue on marketing compared to 9% globally.

In December 2015, Unilever acquired Indulekha Brand for INR 330 crore to step up its presence in the new and emerging categories. They relaunched Ayush Brand with a wide range of products including toothpaste, soap, handwash, shampoo and face wash in five South Indian States.

How Patanjali is planning its future:

A report in The Economic Time says that Patanjali is eyeing to overtake HUL’s existing market presence.

“We have created the capacity of Rs 50,000 crore and w are racing ahead now. Our target is to beat HUL by next year,” Ramdev told the paper.

ABOUT THE TOP MANAGEMENT: 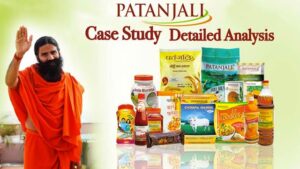